This bit of Evidence Begins with the Book of Genesis. The story of Abraham and his wife. Sarah begat Isaac, and she was elderly. She suggested that Abraham, wanting another child, should lie down with the Egyptian maid-servant Hagar (see Gen: 16: 1-26). And the Angel of the Lord subsequently said to Hagar, "You are with child and you will have a son. You shall call him Ishmael, for the Lord has heard of your misery. He will be a wild donkey of a man; his hand will be against everyone, and everyone's hand against him, and he will live in hostility toward all his brothers." (Also, see Genesis 15: 12-14).


According to this Angel, Hagar's descendants will be "too numerous to count." (Could the Lord's Angel have foreseen a Billion Muslims? Could the Angel know in advance that this lineage, or DNA, could evolve into the 21st Century, with the traits of a "wild donkey" intact...and the hostility of Sunni and Shiite suicidal tendencies of Killers, Obedient to Grand Ayatollahs and Imams? One can only speculate about 'living in hostility toward all his brothers'. We do observe these two denominations eager to kill each other, and attack the "holiest places" with bombs, at a disturbing frequency.


Does the Bible actually reveal it as Profound Prophetic Truth? Is Osama bin Laden and Egyptian Dr. Ayman al Zawahiri merely grim personifications of a larger Reality? The author of the Snake Hunters Blog can only gaze in wonderment at the unfolding nightly drama, and fear for our young troopers. I defer to the religious scholars of Islam, Judaism, and Christianity for additional data.

When the Great Bambooserelli, the Foremost and World's Greatest Hypnotist repeat the experiment for sophisticated audiences, he was using Ivan Pavlov techniques. Ladies and Gentlemen, Behold! Mature, reasonable people were turned into dancing, clucking, wing-flapping chickens...In Public! His subjects were reacting to Repetitive Suggestions. In Nazi Germany, Adoph Hitler was a Master of the Art!

Today, we are witness to another great hypnotist. She is also a Masterful Puppeteer. Ms. Leslie Cagan, of "United For Peace, Justice. UFPJ." Catch Her Act Any Day; Her Campus Organizers Perform with great Activism and Agitation. Her repetitive message is "Peace, peace, peace and Peace"...but there is No Peace. "Get Us Out Of Iraq"...Stop the Bombs!, and the Insanity continues. Young kids with Bomb Packs blow themselves to bits. These are the Shaheed...their Imams tell them it is Allah's Will. Why doesn't Ms Cagan go where the Action Is...with Peace?

If You...are spending hard-earned money to send Junior and Sally to a fine University, Beware! A pedantic Professor may also have Pavlovian Repetitive Techniques.

Our Freedom of Speech, Freedom of Religion, Freedom To Peacefully Assemble, Freedom of the Press, and to freely Choose our Profession, and to Protect Our Heritage...and, Our Right To Think Independently!

These privileges are worth fighting and dying to sustain. That is why the Eagle must continue to fly above these Storms of Discontent. This Symbol needs two vigorous wings, a Strong Left Wing, and a healthy Right Wing, to maintain flight altitude.

Honorable Statesmen must always lead in matters of Importance.... over the political Hacks, especially In A Time Of War. The "Special Interests" of Lobbyists must never have their way over the Common Good...and our precious National Interests, if we are to remain a Free People. Our American Eagle, and our Superior Military Force Will Insure It! This is the American Heritage that your children and your Grandchildren Will Inherit. Keep an Eagle Eye on the Detractors, and the people that attack our National Resolve. reb Feb 11, 2006 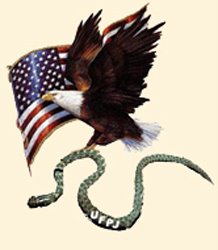