If you haven't seen the following, it is something you should be aware of in the Muslim World.

While all Muslims are not terrorists, the majority of terrorists in the world today are Muslim. Do these pictures demonstrate extremism or are these people just plain Muslims with a peculiar culture?


Poor kids - what a terrible fate to be born as a girl in a Muslim country. 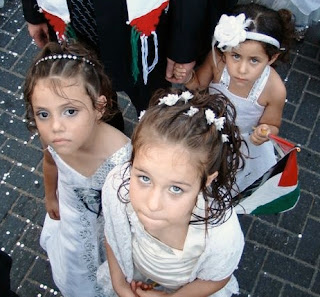 Muhammad married a six year old bride. But he was kind enough to wait until she was nine years old to consummate the "marriage". But Islam has evolved in 1500 years. In Hamas land, in 2009, the brides are almost seven.


A gala event has occurred in Gaza.

Hamas sponsored a mass wedding for four hundred and fifty couples. Most of the grooms were in their mid to late twenties; most of brides were under ten.

Muslim dignitaries including Mahmud Zahar, a leader of Hamas, were on hand to congratulate the couples who took part in the carefully staged celebration.

We are saying to the world and to America that you cannot deny us joy and happiness, Zahar told the grooms, all of whom were dressed in identical black suits and hailed from the nearby Jabalia refugee camp.

Each groom received a gift of 500 dollars from Hamas.

We are presenting this wedding as a gift to our people who stood firm in the face of the siege and the war, Local Hamas strongman Ibrahim Salaf said in a speech.

The wedding photos tell the rest of the sordid tale. 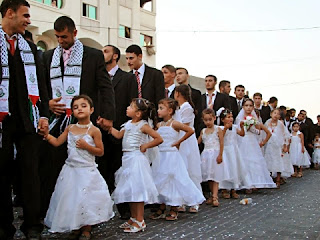 The International Center for Research on Women now estimates that there are 51 million child brides now living on planet earth and almost all in Muslim countries.

Twenty-nine percent of these child brides are regularly beaten and molested by their husbands in Egypt ; twenty six percent receive similar abuse in Jordan.

Every year, three million Muslim girls are subjected to genital mutilation, according to UNICEF. This practice has not been outlawed in many parts of America. 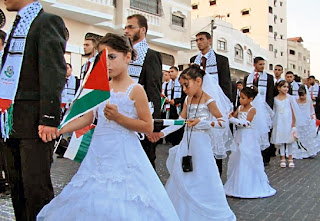 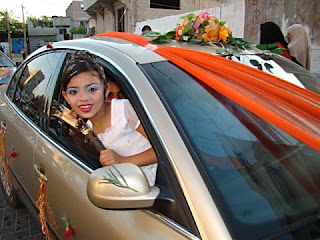 Decide how you really feel about the future of the Western World. 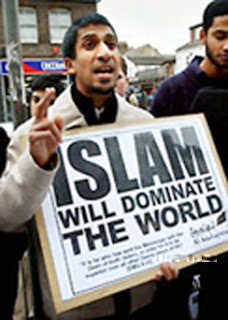 In the same way that a fake $100 bill is not legitimate currency, Islam is a counterfeit religion and therefore does not qualify for first amendment status. It is extremely incorrect to categorize Islam as a religion when its core literature and bloody track record prove a thousand times over that it is an -- Invasion ideology, a shrewd and cunning predator -- disguising itself as a religion. 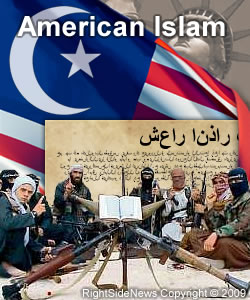 Irrefutable evidence proves Islam to be a “wolf in sheep’s clothing” and a “Trojan horse” hell bent upon destroying all religions and nations worldwide. This irrefutable evidence is a book called the Koran where Allah commands that all Muslims must wage Jihad until the entire world and every single person is either converted to Islam, enslaved, murdered, tortured or abused.

“Fight them until all opposition ends, and all submit to Allah” (Koran: 8:39)

The Koran is a Manual of War

It is an error for anyone to call Islam a religion, but for those who insist, it’s best referred to as a “Religion of War” that has arrived on our shore as an enemy invader for the sole purpose of conquering our nation. This point cannot be overemphasized.

The Koran vows to vanquish all religions and nations worldwide. Allah himself is the protagonist who relishes the role of a “hit man” vowing to knock off every person who rejects Islam -- sending them to burn in everlasting hell. For Allah, there is nothing more heinous and loathsome than those infidels (non-believers) who refuse to convert, and there is nothing he will not do to eradicate them.

“I will terrorize the unbelievers. Therefore, smite them on their necks and every joint and incapacitate them. Strike off their heads and cut off their fingers and toes.” (Koran 8:12)

“Allah wished to confirm the truth by his words: Wipe the infidels out to the last.” (Koran: 8:7)

Read the Koran for Yourself

Don’t take my word on it. Read the Koran. By so doing you will be outraged and ask, “Why in heavens name would any person with integrity and intellectual objectivity call such a blood thirsty and homicidally bigoted “tirade” -- a sacred and holy book?”

Below are two sources for authentic passages from the Koran. The first is entitled "Islamic Quotes" taken from prophetofdoom.net . It provides a few hundred quotes organized into 30 different categories and is very “digestible” giving immediate insight into the malevolence of the Koran and related Islamic texts. The second is an article by Citizen Warrior encouraging everyone to read the Koran, especially “An Abridged Koran” by CSPI. The advantage of the abridged version is that it eliminates monotonous repetition and provides commentary giving a comprehensive perspective and meaning to the text.

One does not need a crystal ball to foretell that Islam will turn America into a living hell if left unchecked. 9/11 was America’s initiation into the so called “religious rites” of Islam. Millions of Americans are outraged that the real culprit in this attack has been given a “free pass” to continue its rampage.

Since 9/11, the religion of peace website has documented 16,124 deadly attacks committed by Islam as mandated by the Koran. These prove that Islam does not deserve the status of a religion and that America has been hoodwinked by so doing. We need to face reality, and implement effective methods if we wish to protect our nation from this religious imposter.

One writer bringing clarity to the situation is Daniel Greenfield. In his article: “Can We Ban Islam? Legal Guidelines for the Criminalization of Islam in the United States” he states in the affirmative that America can legally ban Islam because:

“Organizations aimed at the overthrow of the United States can be banned and membership in them can even be criminalized.”

They key word here is “overthrow”. Any group that wishes to overthrow the United States can be banned. It is well past time for open debate and discussion upon this issue in regards to Islam.

To reiterate, Islam does not qualify for religion status in the USA because it an Invasion Ideology which absolutely mandates the conquest of the United States. Please see my related article entitled "Demoting Islam's Religion Status" it provides the basic elements for discussion and reflection. Also, a must see “you tube” video named "3 Things about Islam" provides a concise summary of the challenge we face. It is imperative for all Americans to learn the truth about Islam or it will eventually destroy us.

Martel Sobieskey has 36 years research experience in the field of religious conditioning and its relationship to warfare. He is greatly alarmed that American politicians, military commanders, educators, journalists, intelligence analysts, and security and police personnel have failed to comprehend the deeply entrenched jihadist conditioning inherent in all of Islam – moderates included.