HILLARY: WHAT WOMEN NEED TO KNOW

It totally amazes me that millions of bright people within the national electorate care nothing about integrity, accomplishments and track records when supporting a presidential candidate. The nation is full of brilliant high achievers on both sides of the political spectrum, but they are all trumped by voting blocs that can be chummed to the boat, regardless of ability, and regardless of trust.

Are women’s groups in America so desperately obsessed with the need to elect a vagina into the Oval Office? Does not the absense of qualifications and integrity matter? Is electability and gender all that counts?

I’m referring to the heir-apparent to the throne, Hillary Clinton. The most unqualified, low achieving, serial lying, deceiving, non-transparent, and possibly the most corrupt candidate in the political arena of 2016. Where do I begin?

Let’s start with corruption, not the average bribery syndrome, but an issue which seriously compromises the national security of the United States. The current issue has been overshadowed by the well-deserved private –e-mail scandal, but it shouldn’t have been. We’re talking about her foundation accepting multi-millions of dollars in foreign, Islamic money.

Sure, the money is on record as going toward the Clinton foundation, but that’s like saying the 2004 money from the Muslim Brotherhood is going toward the Holy Land Foundation (Islam), when in fact it was redirected to the terror group Hamas. Hillary is not supporting terrorism but – if she becomes president – how will her position toward foreign governments be compromised when Islamic radical issues come to the forefront. We already saw a taste of that in Benghazi.

According to a number of sources, the Clinton Foundation – while she was serving as Secretary of State – received multi-millions in donations from a number of countries, to and including Saudi Arabia, UAE, Kuwait, Oman, Qatar, Brunei and Algeria who donated a half million dollars.

So, let’s say Hillary becomes president, and the middle-east erupts even further into a hot zone of Islamic radicalism, some of which is based in these countries and others like it. When it comes time to make crucial decisions, will her judgment be clouded by quid pro quo?

Does she owe favors? You bet she does.

Not only that, her foundation is all about women’s rights, of which the conditions for women in those countries is deplorable, if not the worst in the world in terms of human rights. Is that not a conflict of interest, accepting big money from countries that kill women for failing to cover their face, leaving Islam or asking for a divorce? Is that not hypocrisy in the 1st Degree?

In her now-famous press conference about the private e-mails on March 10th, Hillary did her best to manipulate the audience about the account. But she was even more evasive when one female reporter specifically asked her about conflicts accepting donations for her foundation from multiple middle-east countries that abuse women, and if that didn’t disturb her. Her reply: “With respect to the foundation, I’m very proud of the work that the foundation does… I think it’s very clear where I stand on these issues…there’s no mistake about my passion about women’s rights, here and around the world.”

She never answered the question. She mentioned nothing about the millions of dollars in Islamic donations, the conflicts of interest or the issue of abuse of women abroad.

Want to see a tap dance? Check this video starting a 7:40 where the reporter asks a two-point question. Hillary doesn’t respond to the foreign money question until 9:20, which she doges through in 30 seconds without an answer. That’s evasiveness. That’s deceit. Here’s the video:

Hillary is playing the “women’s rights” card, not because of her passion for women, but to garner a giant voting bloc while selling women down the road at the same time outside the United States.

And women want her to be our president? Are you kidding me? You can’t do better than this?

Hillary cares nothing about America. Hillary cares nothing about her husband. Hillary cares little about anything, other than her lifelong goal of being the first female president. If she needs high-profile issues to ride the wave of victory, she’ll milk them for all she can garner. Her husband’s notorious hot-pants for the gentler sex over a period of thirty years (while married) is a minor embarrassment, but she sure isn’t about to lose his clout as a Democratic campaign magnet. She doesn’t care about fidelity. “Winning” is what matters.

If anyone checks her professional history, it is laden with Zero accomplishments, other than winning one senatorial election and being appointed to the State Department. As senator she did nothing, not one piece of major legislation, not one news conference where she opened herself to tough questions.

As Secretary of State, she traveled the globe doing photo ops, along with Muslim Brotherhood-connected Huma Abedine by her side, clearly raising a question of national security. She also embarrassed America by lying about Benghazi before embarking on a three-month excursion to foreign countries around the world, in order to evade questions. She did not have the leadership skills, or the chutzpa, to answer questions, to lead a probe, to tell the truth, to get to the bottom of a deathly tragedy on her watch. No. She lied about the phony video as being the culprit then went on a 3-month vacation.

An entire book could be written about the litany of deceit and incompetence surrounding this woman, which her patrons choose – yes: Choose – to ignore, despite the mountains of evidence.

Judicial Watch, Inc., is a non-partisan educational foundation, promotes transparency, accountability and integrity in government, politics and the law. Each year, they publish their findings on the most corrupt politicians in America. This was their list for 2012, the last year Hillary Clinton was employed in government.

“One day after the attack, on September 12, 2012, Sec. Clinton said the following: “Some have sought to justify this vicious behavior, along with the protest that took place at our embassy in Cairo yesterday, as a response to inflammatory material posted on the Internet. America’s commitment to religious tolerance goes back to the very beginning of our nation. But let me be clear — there is no justification for this, none.” She then joined President Obama in taping a television ad apologizing to the Muslim world for the obscure video, spending a reported $70,000 in taxpayer funds.”

Women voters: You can’t seriously want this woman to lead out country. You can do better.

The following link is an interesting article about the truths and untruths concerning Hillary’s background, by someone who worked with her for twenty years, Dick Morris. Quite revelaing:

Click here: Truths that need to be told about Hillary Clinton from Dick Morris – Freedom Outpost 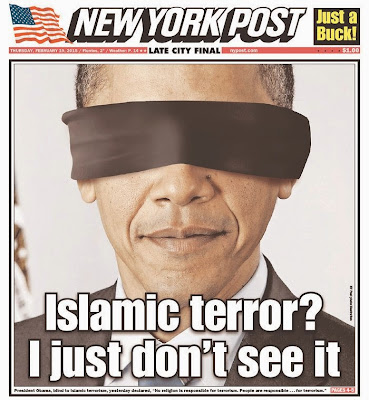 #1 - "Whatever we once were, we are no longer a Christian nation"
#2 - "We do not consider ourselves a Christian nation.
#16 - "In our household, the Bible, the Koran and the Bhagavad Gita sat on the shelf alongside -- > > books of Greek and Norse and African mythology"


President Obama, Sir: Your detractors say that you seem bored, or disinterested when anyone mentions the extremes of violence so often displayed in Syria & Iraq by Islamic State (IS), with multiple grim beheadings, cruxifixtions and mutilations... or the recent threats by Al Shabaab (a known affiliate of
al-Queda) in Nairobi, Kenya that slaughtered dozens of innocent shoppers in 2013, and promises the same fate for Shopping Malls here in Canada and the United States. You turn away from these vital matters, stating that "It's Not Islam" Well, sir, perhaps you should read your Qur'an, beginning with 'The Manual of War'
(click here)http://www.thereligionofpeace.com/Quran/023-violence.htm">

"The punishment of those who wages war against Allah and his Messenger (Muhammad) and strive for mischief through the land is: execution, or cruxifiction, or cutting off hands and feet from opposite sides, or exile from the land; that is their disgrace in this world, and a heavy punishment is theirs in the Hereafter" - Qur'an 5:33

"Fight and slay the Pagans wherever ye find them, and lie in wait for them in every stratagem of war" - Qur'an 9.5

"I will cast terror into the hearts of those who disbelieve; Therefore, strike off their heads and strike off every fingertip of them" - Qur'an 8:12

"It is not for any prophet to have captives until he has made slaughter in the land. Ye desire the lure of this world, and Allah desireth (for you) the Hereafter, and Allah is Mighty, Wise."
Qur'an 8:67

"Allah is our Objective, The Prophet is Our Leader, The Qur'an is Our Law;
Jihad is our Way, and Dying in the Way of Allah is our Highest Hope"

Q:  > What Does The Religion Of Peace Teach About...Violence?
http://www.thereligionofpeace.com/Quran/023-violence.htm